Everyone has their own favorites when it comes to art. Today, we take a good look at one of the older American artists: Paul Thek. In one of the earlier incarnations of our website, we always had a page dedicated to the pieces of Paul Thek.

Who is Paul Thek?

If you don’t know who he is, you’re missing out. Paul Thek, born on the 2nd of November in 1933 is one of the earlier artists to show that it is fully possible to transition from one particular medium to another. Thek has started his career as a painter and slowly evolved to try other mediums. He went on to try his hand at sculptures later on in his life.

Thek went to Art Students League of New York and Pratt Institute for art training. He also attended the Cooper Union School of the Arts. It was not until he moved to Miami and was introduced to other artists that he had started to create his initial drawings. These drawings would become well-known as stellar examples on how to use charcoal. Later on he tried his hand at graphite, watercolors, and even monochromatic oil paintings. 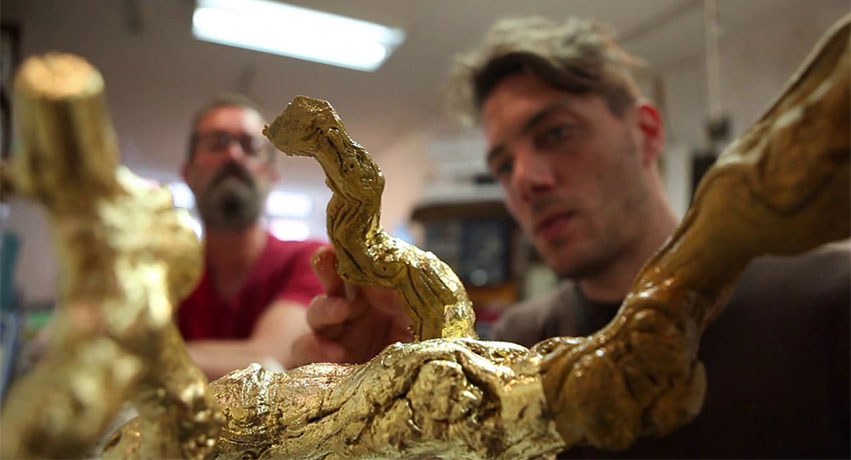 He is probably most well-known for the series of wax sculpts which was fashioned making use of his own body. The series was called Technological Reliquaries. These wax sculpts were all presented to his audiences within glass cases. Before he released the wax sculpts, he was making quite a name for himself using meat encased within Warhol boxes under some Plexiglas. Yes, someone was making use of meat for art way before Lady Gaga came about. It is believed that Thek had abruptly ended his meat series out of the fear of being labeled as “The Meat Man”.

While such a title would have been fine with anyone who wanted to be in Ripley’s Believe it or Not, it wasn’t something that an artist like Thek would have wanted to overshadow his career. Particularly since information wasn’t easily shared back then. Unlike now when information is so easily disbursed that it is even taken for granted, a moniker like “meat man” would have killed any chance of having an open mind in any of his future shows.

Thek wanted his work to be able to express its message, not the “message” to encompass the piece itself. As such, he went on to the wax sculpts of different parts of his own body. It was the art that he worked on after the wax sculpts that really got everyone’s attention.

It was his piece entitled The Tomb that captured the interest of many. Thek had made a life-sized representation of his self and made it seem like it was decomposing. It was said that this was Thek’s commentary on the decomposing state of affairs back then. It was also touted as a critique regarding the forces which subject people to any sort of surveillances that reduces individuals to a bare state. While the pieces were not hyper realistic, it was still life-like enough that some people were scandalized. It provoked discourse regarding the concept of line that art should not cross.

As a piece of art, it did its job tremendously. It was able to provoke thought and engagement in people who had not even fully digested the piece and thought it through. Art has always been made to evoke emotion in their audience.

After much time in New York, Thek moved to Italy where her created several pieces. He eventually returned to NY—however it seemed that the fascination with him had cooled. Before passing because of AIDS/HIV, he spent majority of his time as grocery store bagger. This time in his life would serve as a wake-up call for many artists that studied Thek’s life and his work.

While you may be the toast of the town, in a few years, you may be struggling to make ends meet. While this is true for everyone no matter what your profession is, there was something a bit more terrifying to the concept for artists. Art is all about breaking free of the mold of society’s rules and expectations. To find who you are and having to cater to established routines is often scary to most artists.

For those that were utterly scared that their budding artists would live such a life, this fortified that idea that art does not pay and should only be pursued as a hobby and not as a full-time profession. It is thankful then that times have severely changed. Art has changed and will continue to change. Even the art of Thek which was one thought to be appalling is now seen in a different light.

Much like how van Gogh was not appreciated or celebrated during his time, Thek’s pieces—particularly Tomb are now being viewed as thoughtful commentaries in a way that they were not previously thought of before.

For us at Rove TV, Thek’s untitled pieces remain some of our utmost favorites. Like the one he had made in 1974 which depicted grapes hanging on the vine. Something so simple was married into newspaper. He was able to cover up line after line of current events with a peaceful and fruitful setting. It was very much like him to take the ordinary and give it a new twist. He turned something that would usually be used and tossed aside into something that was worth considering a little bit longer. It also made it quite hard to throw away (if the dastardly thought even crossed your mind).

The following year of 1975 saw another untitled piece which is more popularly referred to as “Figures by Rock”. He made use of oil on canvas and it was full testament to the fact that an artist can stray from their first medium but an always comfortably return. This, to us, gives so much hope for those who ever lose their way. All you have to is take a moment to be alone and realize that home is something that you take with you no matter where you go.